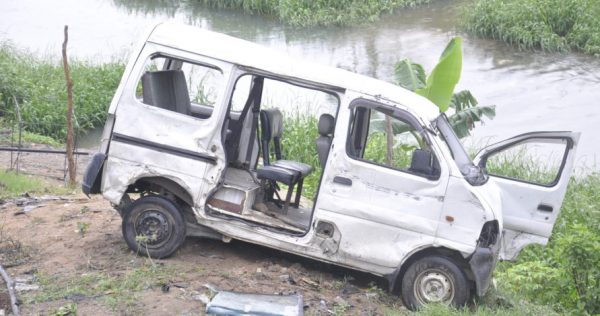 It was indeed a black weekend for residents of Aba, the commercial hub of Abia State as over 10 persons were reported dead in a ghastly auto accident that occurred on the Ikot-Ekpene-Aba Expressway.

The accident which was allegedly caused by a truck carry chippings and was heading into Aba also left many commuters and commercial bus drivers injured leaving people to wail uncontrollably.

The incident attracted crowd and as well caused heavy traffic jam on the expressway, leaving men and Personnel of Federal Road Safety Corps (FRSC) and Nigeria Police Force (NPF) with much work of ensuring that there was free flow of human and vehicular movement on the road.

An eyewitness who narrated the incident to Nation blamed the truck driver for recklessness, stressing that they suspected that the driver who was descending the Ogbor Hill Bridge on a high speed lost control of his vehicle before crashing into the commercial bus and another car in motion, a commercial tricycle and pedestrians on the bridge. 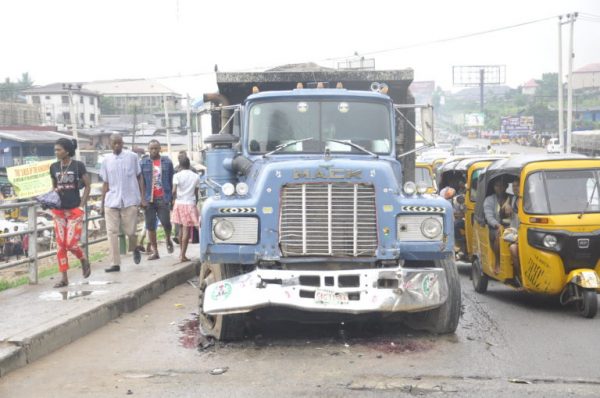 “The man was coming down the bridge with speed and in the process, lost control of his vehicle. The bus, some keke were here loading their passengers before the accident. The car down the bridge was hit by the truck and the car destroyed the rail before landing into there. I am afraid if there was any passenger inside that car that survived. Another private car was also affected by the accident and I don’t think the passengers survived.

“The people affected were about 20 or more about 10 persons died. Many people sustained injuries because it happened during the rush hour when the road is always busy with vehicular activities.”

The eyewitness said that the whereabouts of the truck driver and his conductor were unknown, stressing that they could have abandoned their truck and took to their heels.

“If the truck driver and the conductor were sighted by the crowd, am sure that they would have been lynched by the crowd who it took the presence of the police and other security agencies to stop them from setting the truck ablaze.

However, a staff of the FRSC Aba who crave anonymity gave the number of people involved in the accident as 21; 8 females and 13 males.

According to the source, 10 males and 8 females were injured while three persons died as a result of the accident.

The source said that the injured persons were receiving medical attention in one of the private hospitals along the Aba-Ikot Ekpene Expressway. This is even as the source credited the cause of the accident to reckless driving.