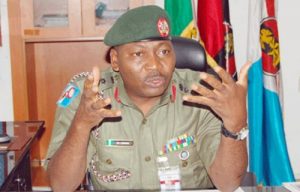 Colonel Sagir Musa, Deputy Director, Army Public Relations, made the disclosure on Friday in a statement made available to the News Agency of Nigeria (NAN) in Onitsha.

Musa said the incident occurred at about 12 noon on April 10, noting that Yakubu was at the time of his arrest, dressed in the Nigerian Army camouflage uniform and combat boots.

“On interview, he could not provide correct answers to the questions asked, thereby exposing him as an obvious impersonator.

“Further questioning revealed that the culprit had been in the habit of harassing and extorting members of the public under the guise of being a soldier, and presents fake identification card as evidence.

“The patrol team, on April 10, at about 2:50 p.m., handed the culprit to troops of 302 Artillery Regiment deployed for duty at the Onitsha Head Bridge,” Musa said.

The deputy director said the suspect had since been questioned at the Regiment’s Military Police Orderly Room, with the view to handing him over to the police for further action.

He urged members of the public to take note of the occasional tendency of hoodlums who disguised as military personnel to defraud them.

“The public are also requested to report such bad elements when seen to the nearest police station or any security office close to them,” Musa said.