Governor of Ekiti State,Ayodele  Fayose,  has sent warning to his enemies,that he was to be messed up with.

He was a guest on AIT yesterday where he said that those who hit him die and those he hits dies. He said this while reacting to attacks he receives from members of the opposition party in his state. 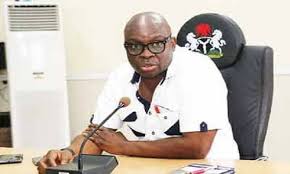 “My name is Peter The Rock, you hit me, you die, I hit you, you die. They will meet me in Ekiti, they should forget about hijacking Ekiti, the power of the people is greater than those of us in power.

The people are on my side”he said Fayose added that he doesn’t have any ambition to become the president of Nigeria but that if he even becomes one, he would do better than the APC-led government.