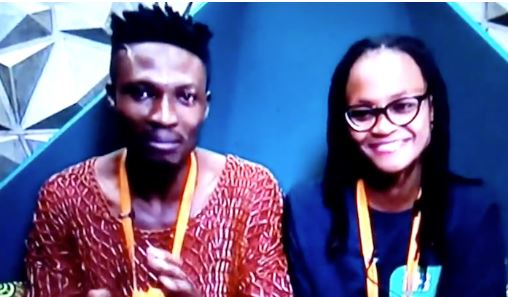 In a new interview with Punch, winner of the Big Brother Naija TV show, Efe Ejeba, opened up on his stay at the house, what he feels now for Marvis, the allegation that he stole the ‘Based on Logistics’ slang from another artiste and his relationship with Debbie-Rise,

See excerpts from his interview below;

On his relationship with Marvis:

“I only kissed Marvis because that was the only thing I wanted to do. I respect women and I cannot afford to be fooling around with them.

For me, kissing shows a little bit of emotion but if it goes beyond that, it means we are taking it to another level and that is why I did not go beyond that. I admitted in the house that I like her but I always knew that it would only last within the house because she has a boyfriend.

Asked if he wishes to visit Marvis’ family:

I don’t have a girlfriend. My priorities are different and I am not moved by women but that does not mean I am gay. Never.”

On his relationship with Debbie-Rise:

“I was never really interested in Debbie Rise and when she came to the house, it was my duty to make her feel comfortable. In the house they told me I had to improve on my niceness because they felt I am not too nice but I tried my best.

She took the vibe on a different level so I had to let her know that it was not what she thinks. Her guitar really got on my nerves and I had broken it like 200 times in my mind. Every day I set my eyes on the guitar, I broke it in my mind.”

On claims that he stole the ‘Based on Logistics’ slang from another artiste:

“I am sure that those who said that I did not form the slang just want me to talk. They just want to cause a controversy. A lot of things have been said online that is not true. I coined that word in 2013 when I went for ‘Just Bring it On’ reality show.

I won N300,000 on the show. I coined the word because they were having a lot of logistics issues in setting us up because we stayed in the house for two weeks. Each time the guy came to meet us, he would say they had some logistics problem so before he tried to explain to us, I would tell the housemates that the matter was based on logistics in that previous show.

The show was organised by Kevin Pam, winner of Big Brother Africa 2009.”

The #BBNaija winner revealed that the show gave him the opportunity of getting on a plane for the first time.

“The first time I got into an aeroplane was when I was travelling for the show and I was really shaking. It was a terrifying experience for me when we were ascending and descending. My flight was from Lagos to Abuja and from Abuja to South Africa.

The South Africa trip was worse because there was turbulence. There was a man who was chatting with someone and during the turbulence; he was thrown away from his chair. I had to tighten my seat belt and clinch to the chair.

That was how I was all through the flight.”