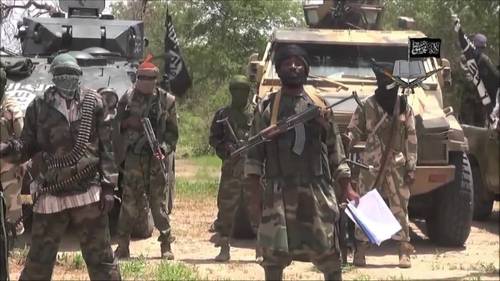 Ex-wife of the factional leader of the Boko Haram terrorist group, Mamman Nur, was one of the two teenage suspected suicide bombers intercepted by the Nigeria Security and Civil Defence Corps in Borno State.

The leader’s 15-year-old ex-wife, Fatima Kabir, had Mamman Nur as her first husband before she was divorced and later married two other insurgents in a space of two years during her captivity.

Fatima was four months pregnant and tested positive to HIV when she was caught loitering at a Maiduguri motor park.

Speaking to journalists, Fatima claimed that she hailed from Gwoza town and was abducted by the insurgents and taken to Sambisa forest three years ago.

She said: “I am an indigene of Gwoza town. One day, Boko Haram stormed our town, killed many people and kidnapped me.

“Since then, I have been living in the dreaded forest and also passed from one Boko Haram commander to another.

“I was tired of that horrifying life; so, one day, I resolved to flee, and I succeeded. As I was running, I saw  a team of military men and quickly rushed to them and narrated my ordeal.”

She added: “They sympathised with me and took me to their colleagues in Gwoza, who in turn conveyed me to Kano motor park in Maiduguri and gave me N3,000 to use for food and transport.

“I was told to look for my parents in one of the camps for the Internally Displaced Persons. The night fell and I became stranded with no where to go. Some operatives of the civil defence apprehended us and took us here.”

Fatima further revealed that after her marriage to the factional leader of Boko Haram, she was married to two other insurgents who later abandoned her and fled from Sambisa.

The other teenage girl arrested alongside Fatima, Amina Salisu, corroborated Fatima’s narration that they were stranded before their arrest and that they never planned detonating any explosive.

She said she hailed from Gulak town in Adamawa State, but was abducted and taken to Sambisa two years ago.

She also alleged that she was married to two insurgents during her captivity which lasted for two years.

The Borno State Command of the NSCDC, Ibrahim Abdu, during the briefing, said the intelligence operatives intercepted two teenage girls, comprising an ex-wife of the factional leader of Boko Haram sect.

Abdu, while parading the girls at a press briefing in Maiduguri, said they were suspected to have been smuggled from Sambisa forest into the town to wreak havoc on innocent civilians.

He said one of the girls, 15-year-old Fatima Mohammed Kabir, confessed to being an ex-wife to Mamman Nur and that medical tests proved that she was carrying a four-month pregnancy and is infected with HIV.

He added that the other lady, 14-year-old Amina Salisu, had also admitted to marrying two Boko Haram members at separate times in Sambisa forest.

The commandant further said the girls were found loitering at the popular Kano motor park in Maiduguri metropolis and that upon extensive interrogation, they confessed to have been sneaked into Maiduguri for possible suicide attacks.

The commandant explained that after proper investigation, the command would hand them over to the appropriate authority for next line of action.