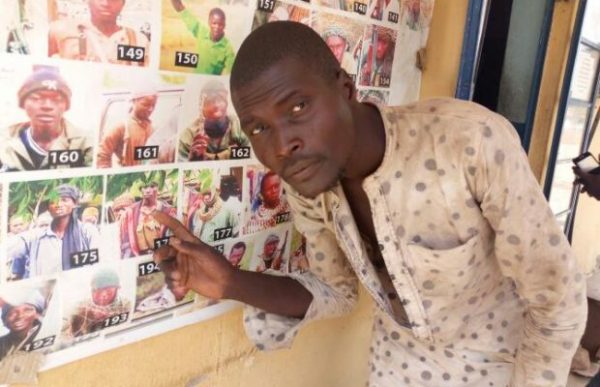 Bauchi State Police Command has announced the acrest‎​ of​​​ one Muhammad Adamu Nafiu, male, aged 25, of Balanga, Gombe State, at Tama village in Toro LGA of ​the state.
​
Commissioner of Police, Garba Baba Umar, in a statement on Wednesday, said the ​s​uspect is a notorious ​top commander of Boko Haram, who relocated to Tama village in order to evade arrest after the​ sect was​ dislodged by troops at Sambisa Fo​rest.

​”​Preliminary investigation revealed that suspect was amon​g​ those declared by the Nigerian Army on Serial Number 176 on its wanted list​.​

​”H​e has voluntarily confessed to have killed over 150 people in Baga LGA of Borno State​ alone​.

​”​Case under investigation after which suspect would be handed over to the appropriate authority for discreet investigation​”, he said.

The Police boss also announced the arrest ​of one Osama Abubakar male, aged 20yrs, of Malam Goje Street of Bauchi.

​The ​suspect ​had ​use​d​ a sharp knife and cut off the left hand of one Abdul-aziz Mohd male, aged 23yrs of Gombe Road Bauchi, who is also alleged to be a Sara-Suka member.

​”​Preliminary investigation revealed that suspect is a notorious Sara-Suka thug who was convicted for similar offence in 2016.

​”​Suspect voluntarily confessed and is assisting the police with useful information that will assist in apprehending his accomplices​”, the statement added​.