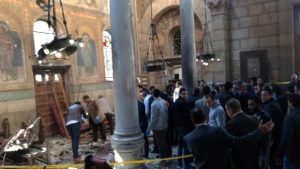 A day set aside to celebrate the triumphant entry of Jesus into Jerusalem became a day of mourning in Egypt,  as a bomb was exploded at a church north of Cairo,which killed at least 21 people and dozens left injured who had gathered for Palm Sunday mass, state media reported, in the latest apparent attack on Egypt’s Coptic Christians.

Some 40 people were wounded in the blast, which struck at a Coptic Church in the Nile Delta City of Tanta, 120 kilometres (75 miles) north of Cairo, the reports said.

A medical official at a hospital in Tanta confirmed to AFP that at least 13 people had been killed.

Palm Sunday is one of the holiest days of the Christian calendar, marking the triumphant entrance of Jesus to Jerusalem.

The state-run Nile television channel said the blast struck the Mar Girgis Coptic Church in Tanta just before 10:00 am (0800 GMT).