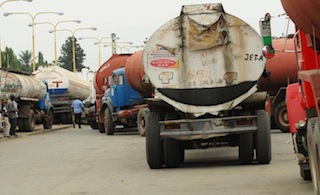 The Nigeria Union of Petroleum and Natural Gas employees has announced the immediate halt of the nationwide industrial action embarked upon by tanker drivers under its Petroleum Tanker Drivers arm.

NUPENG President, Igwe Achese, announced that the strike has been called off after a meeting which involved members of the union, PTD, the National Association of Transport Owners and the management of the Nigerian National Petroleum Corporation, led by its Group Managing Director, Dr. Maikanti Baru.

The meeting was held at the corporate headquarters of the NNPC in Abuja and commenced around 3 pm on Monday.

The PUNCH had reported that the NNPC would meet with the PTD, NARTO and NUPENG in order to put an end to the strike.

Last week, the PTD arm of the Nigeria Union of Petroleum and Natural Gas Workers declared that they would commence a nationwide strike beginning from Monday.

Achese had announced the strike in a signed communique on Friday in Lagos after its Central Working Committee meeting held at the union’s secretariat.

The NUPENG president had stated that the strike would draw the attention of the Federal Government and other stakeholders to some unresolved issues bordering on the welfare of workers, such as bad roads, poor remuneration, insecurity and the alleged excesses of some security agencies.