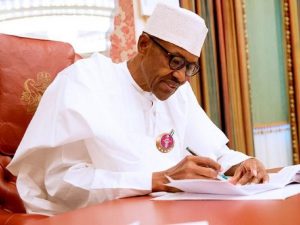 82, whose nomination as a non-career ambassador was rejected by the Senate.

The Senate had on March 23, 2017, dropped two of the 47 ambassadorial nominees sent to it by the President for legislative confirmation.

Nsofor from Imo State and 59-year-old Mr. Jacob Daodu from Ondo State were rejected based on the recommendation of the Senate Committee on Foreign Affairs.

President of the Senate, Senator Bukola Saraki, however, read a letter from President Buhari at the plenary on Wednesday, in which he renominated Nsofor and replaced the Ondo nominee with Joseph Olusola Iji.

The President also replaced Mr. Suleiman Zana Hassan from Gombe State who was nominated as minister after his ambassadorial nomination had been confirmed by the Senate.

The Chairman, Senate Committee on Foreign Affairs, Senator Monsurat Sunmonu, while presenting the report, had stated Nsofor was not rejected due to his age but based on his performance when he was screened. She added that Daodu’s rejection was based on a report by the Department of State Services, which disqualified him.

On Nsofor, the committee had observed that, “The nominee has served mostly in the academics and the legal profession, both here in Nigeria and abroad. Although he was calm at the screening, he looked frail and tired. His responses to the issues raised were either not answered or devoid of details and mostly satirical.”

Sunmonu also cited an instance where Nsofor was asked how he could cope with diplomatic duties at his age and he asked members of the panel how President Robert Mugabe was managing Zimbabwe at his age.

The President also wrote the Senate separately to seek legislative confirmation for the appointment of Prof. James Momoh as Chairman of National Electricity Regulation Commission.