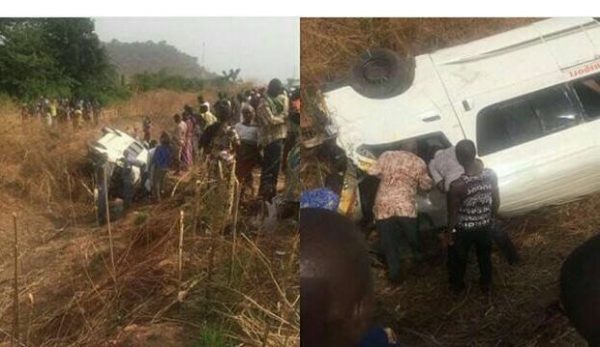 Another major tragedy was averted on Monday as a bus fully loaded with members of the TB Joshua-led Synagogue Church of All Nations, SCOAN, landed in a ditch while trying to avoid some cows grazing along the road.

The church members were in a bus en-route Abuja from Lagos when the incident happened.

It was gathered that the driver lost control when he suddenly rammed into the cattle grazing at a dangerous bend, along the ever busy Abuja-Lokoja road.

His efforts to avoid the cows were futile as his brake failed after hitting one of them. The vehicle somersaulted twice before landing in a deep ditch.

Though, nobody died in the ghastly mishap, over five cows were crushed to death.

Residents of the area came to the victims’ rescue before the arrival of the FRSC officials.

The incident is coming barely 24 hours after over 100 members of Deeper Life Bible Church escaped death on Otedola Bridge in Lagos after a bus conveying them from a retreat went up in flames.