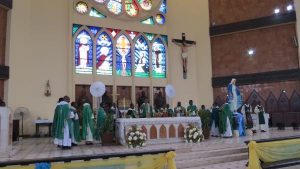 The Catholic Church on Sunday confirmed the death of a health coordinator, Christiana Umeadi, in an auto crash.

In a statement signed by Christian Anyanwu, Director of Communications, Catholic Secretariat of Nigeria, CSN) in Abuja, the Church said Ms. Umeadi was until her death a member of Sokoto Diocese.

Mr. Anyanwu said Ms. Umeadi, a reverend sister, who was returning to her station after participating in mass cerebrospinal meningitis immunisation, was involved in an auto crash at Bakura, in Zamfara State.

He said that the medical team had covered several parts of Sokoto diocese for the immunisation in the last one month and as the outbreak got worse the health team intensified their efforts.

The states they covered, he said, include: Sokoto, Katsina, Zamfara and Kebbi.

Mr. Anyanwu explained that Ms. Umeadi led her team to Zamfara State for the immunisation exercise in March, where they were billed to spend just a day in Gusau town.

He noted that her remains had since been deposited in the morgue at the Usmanu DanFodio Teaching Hospital (UDUTH) Sokoto.

He said that her immediate family, the Dominican Congregation, the Diocese of Sokoto and all her patients were left in utter shock and disbelief.

“We all resign to the will of God and trusting that our Sister will rise again at the resurrection,’’ he said.

The News Agency of Nigeria reports that until her death, Ms. Umeadi was the Assistant Prioress General of the Dominican Sisters of St. Catherine of Siena, Gusau, and Zamfara State.

The church has yet to announce a date for her burial.

At least 80 people have lost their lives to meningitis in Zamfara in the last two months, the state Commissioner for Health, Suleiman Gummi, has said.

Meningitis had earlier killed at least three students in a Secondary School in Maradun Local Government Area of the state.

Severe heat occasioned by intense solar radiation and living in congested apartments are parts of what medical experts believe are causing meningitis.