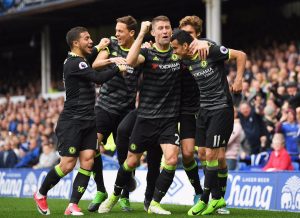 Chelsea Football Club are three wins away from becoming champions of this season’s Premier League after a fantastic performance put up by the blues  as three second-half goals overcame Everton at Goodison Park.

The first half was drab but the champions in waiting had to be patient, with Pedro’s left-footed, long-range strike not coming until the 66th minute.

Everton had started brightly in a game that opened at breakneck speed, with Dominic Calvert-Lewin coming closest to scoring when he struck the post from a tight angle.

In other games, Manchester City’s draw at Middlesbrough means Ronald Koeman’s side, in seventh, are eight points adrift of the top four with three games left, while Manchester United failed to take maximum points against Swansea after taking the lead from the spot through Wayne Rooney.