Diego Costa scored two second half goals on Tuesday night as Chelsea cruised to a 4-2 win over Southampton in the Premier League.

Chelsea took the lead after just five minutes through the returning Eden Hazard, but Southampton 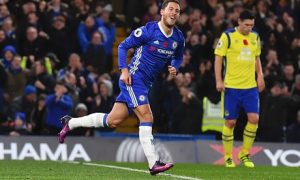 tried to show they were also in for business as Oriol Romeu levelled things up to add another twist in the title race.

However, Gary Cahill’s goal right on the stroke of half time made sure Chelsea were in front at the break
Things panned out well for the Blues as a second-half brace from Diego Costa – including his 50th goal in the Premier League – ensured that the Blues would pile the pressure back on Tottenham Hotspur as they have now restored their seven point gap at the top.