All 18 counts charge against Justice Adeniyi Ademola of the Federal High Court, his wife Olubowale, and a Senior Advocate of Nigeria, Mr. Joe Agi have all been dismissed 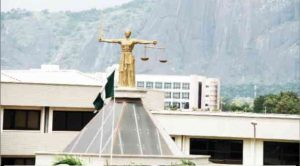 by a High Court of the Federal Capital Territory in Maitama, Abuja.

Justice Jude Okeke discharged the three defendants in a ruling upholding the respective no-case submissions filed by the defendants.

The charges were filed last year by the Office of the Attorney-General Federation following the raid by Department of State Service’s operatives on the judge’s house on October 7, 2016.

Justice Okeke ruled on Wednesday that the prosecution was unable to make out a prima facie case with respect to any of the 18 counts on concluding its case with 19 witnesses and exhibits A to ZZZ to warrant calling on the defendants to enter their defence.

Justice Okeke in his final comments noted that the case of the prosecution was built on strong suspicion and speculation fueled by the feeling of fight against corruption which not reasonable court could base any conviction on.

The court held that it would amount to asking the defendants to prove their innocence contrary to the provision of ‎the Constitution which required the prosecution to prove their guilt.

The court said it would fail in its duty to ask the defendants to prove their innocence, adding that taking such decision could only achieve the applause of the informed minds.

Justice Okeke held that the prosecution was unable to make out a prima facie case showing that the sum of N30m paid by Agi into Olubowale’s bank account in three tranches of N10m each between March 11 and 26, 2015, was gratification meant to influence Justice Ademola in his official functions.

Justice Okeke held that the prosecution was unable to show any contrary evidence to the claim by the defendants that the sum of N30m was not a gift passed from two mutual friends of Justice Ademola and Agi by the SAN to Olubowale in support of the Ademolas for the wedding of their daughters held in April 2015.

The court ruled that the charges also failed to disclose which of the particular official functions of Justice Ademola – whether the judicial functions done in open court, administrative functions or prison – the N30m was meant to influence.

He also ruled that the evidence of the 16th prosecution witness, an officer of the Department of State Service, Mr. Babatunde Adepoju, who investigated the case, admitting that he could not link the gift of N30m to any case Agi was having before Justice Ademola was fatal to the case of the prosecution.