Chelsea Football Club finally met their match as they were stunned by Crystal Palace in front of their home supporters at Stamford Bridge.

The match looked like it was going to be a win  for Chelsea when Cesc Fabregas scored the opener for the home side before Wilfred Zaha put palace immediately back into the game with a superb equaliser.

Sam Allardyce men had other ideas as Christian Benteke got the winning goal of the match on the 12th minute, Palace won the game 2-1 which put the Premier League title way open.

The last time Chelsea lost an home game was on September 16. 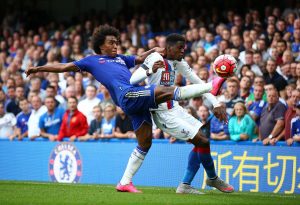 Liverpool closed to within 10 points of the leaders, albeit having played a game more, after sinking Everton 3-1 in the Merseyside derby.

But Manchester United lost ground in the race for top-four places following a frustrating 0-0 draw at home to West Bromwich Albion.

Zaha’s headline-grabbing display against Chelsea followed a week of headlines about his decision to switch international allegiances from England to Ivory Coast last year.

His side fell behind in the fifth minute when Eden Hazard crossed from the left for Fabregas to score at the near post.

But Zaha levelled matters in the ninth minute, drilling home through a posse of defenders, and two minutes later his pass freed Benteke to dink a cocky finish over Thibaut Courtois.

Tottenham kept their title hopes flickering after Eric Dier scored from close range and Son Heung-Min converted a cross from Dele Alli in the second half at Burnley.

However, victory came at the cost of injuries to midfielders Victor Wanyama and Harry Winks, who was taken to hospital with a potentially serious ankle injury.

Philippe Coutinho scored a dazzling goal and made another for Divock Origi as Liverpool overcame Everton at Anfield.

Sadio Mane put Liverpool in front in the eighth minute, drilling in following a one-two with Roberto Firmino, but was later forced off by a knee injury.