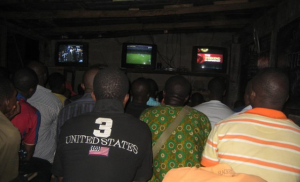 The viewing centre is located at Onuebonyi area of the town and witnesses likened the incident to a scene from the American Hollywood movies.

The attackers stormed the centre about 7.30 p.m., midway into the match’s first half and sat down like other viewers enthralled by the captivating encounter before making for their prey, a second-year student of the Ebonyi State University, Abakaliki.

Another witness and the viewing Centre Operator, Mr John Otubo, noted that the attackers were magnanimous for reducing the impact of their attack considering the number of arms they brandished.

“I watched them brandish two short guns, axes and knives as they simply went for their target, dragged him out and started using the weapons on him.

“No one can explain why they did not shoot him as they concentrated on him without attacking any other person or shooting sporadically to elicit stray-bullet incidences,’’ he said.

Otubo, however, said that several viewers were injured during the ensuing stampede while they scampered for safety as the viewing was abruptly halted.

“Pandemonium set forth as viewers ran in different directions and with the centre having only one entrance, most viewers pulled down the zincs used as makeshift walls at the centre.

“Several viewers were injured in the process, including those who were trampled upon during the stampede as the attackers felt their prey was dead and hurriedly left the scene.

“I and other sympathisers met him motionless and in his pool of blood with the severe cuts on different parts of his body inflicted by the attackers.

“We immediately took him to a hospital which I cannot disclose presently as doctors said his condition was critical,’’ he said.

He said that he was undecided whether to report the matter to the police, adding that he would suspend viewing activities temporarily.

Onu, who is also the governor’s Senior Technical Assistant on Youth Mobilisation and Empowerment, urged youths to collaborate with security agencies in the state to fish out cultists wherever they reside or operate.

“We will not allow any person or groups to disrupt the prevailing peace in the state which is being complemented by the governor’s developmental strides in all sectors,’’ he said.

The town has witnessed renewed cult activities involving three cult groups in EBSU which resulted in the confirmed death of a final year student, Theophilus Onele.

DSP Jude Madu, the state’s Police Public Relations Officer, said on Monday that he has not received the report of the incident but that manhunt on cultists had been intensified.

“The command arrests suspected cultists terrorising the town on daily basis and after our investigations, they are duly prosecuted to deter others.

“We will continue to appeal to the government, parents, religious bodies and youths among other stakeholders to intensify their campaign against cultism to make the society safe and habitable for all,’’ he said.

Sources within EBSU and the town disclosed that there had been several cult-related killings in and around the town which had not been made public by the police.