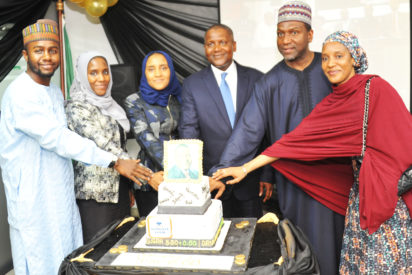 President of Dangote Group and former President of Council of the Nigerian Stock Exchange, NSE, Alhaji Aliko Dangote, yesterday, indicated that more companies under the Dangote Group would be listing on the NSE.
Dangote made this disclosure when he visited the NSE and stockbroking community to sound the closing gong in commemoration of his 60th birthday anniversary, saying his dream was to build thriving businesses that would cater for millions of Nigerians.

He said the group would witness exponential growth and expansion within the next 10 years that would result in increase in the number of shareholders to over two million.

“My dream in the next 10 years, is to hold our Annual General Meetings, AGMs, in the stadium not halls, due to the large shareholders we will be targeting. This means we are going to increase our investment in the Nigerian capital market,” he said.

He commended the stockbrokers for their support to the Dangote Group of Companies.

The doyen of stockbrokers, Alhaji Rasheed Ola Yussuf, said Dangote’s decision to celebrate his birthday with the capital market community was a testimony to the mutually beneficial relationship which had evolved over the years among Dangote, brokers and capital market in general.

He said though times were tough at the capital market during Dangote’s time as president of NSE, he achieved remarkable feats.

He explained that chief among his achievements was the resolution of the margin loan crisis which threatened to cripple the entire capital market.

He stated: “Dangote became the president of the council of NSE at the most challenging period for the capital market. On one hand, the NSE was faced with a serious management succession crisis, while on the other hand, the market had to contend with the ravaging margin loans crisis.”