The immediate past Governor of Niger State,Babangida Aliyu has arrested by the Economic and Financial Crimes Commission( EFCC ) 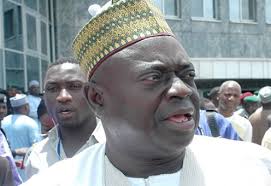 over an alleged scam involving N5bn.

It was learnt that Aliyu, who served between 2007 and 2015, was arrested by the anti-graft agency on Tuesday after he was invited by the commission.

The suspect was, however, detained after interrogation, pending further investigation.

A source at the EFCC said, “We invited former Governor Aliyu to our office on Tuesday and he has been in our custody since then.

“He was invited following an investigation into a scam involving about N5bn.”

When contacted on the telephone, the spokesman for the EFCC, Mr. Wilson Uwujaren, confirmed that Aliyu was in the custody of the commission but failed to give more details.

“The former governor was invited by the commission and he is still in our custody,” Uwujaren said.

It will be recalled that the current Governor of Niger State, Alhaji Abubakar Bello, as well as the members of the Niger State House of Assembly, had called for a probe of Aliyu’s administration which they described as fraudulent.

Bello said there were several questionable transactions the former administration must account for.

The discrepancies, according to him, were discovered by the financial management committee set up by his administration, lamenting that one of such discrepancies was discovered in the state and local government joint account where a massive fraud was allegedly perpetrated.

Bello said, “We instituted a financial management committee to look at all major financial transactions of the state and local governments from May 2007 to May 2015.  The committee has made substantial progress and the findings are quite revealing.

“A review of the operations of some of the major bank accounts of the state and the Local Government Joint Accounts Allocation Committee over the last eight years revealed some despicable patterns such as huge cash withdrawals by government officials, private individuals and PDP officials and members.

“For example, an examination of only two bank accounts of Government House shows more than N70bn cash withdrawals by a few officials who must explain the purpose for which the withdrawals were made. The operation of the joint account was characterised by diversions and a misapplication of huge funds especially those paid for Ward Development Projects and 10km roads projects.

“For instance, out of the total sum of over N11bn paid to the accounts of Ward Development Projects, the relevant officials of the ministry of local government could not account for N2.86bn, while N613m was spent on ‘ghost’ vehicles and N675.50m was said to be lent to Ministry of Finance where the funds cannot be traced.”