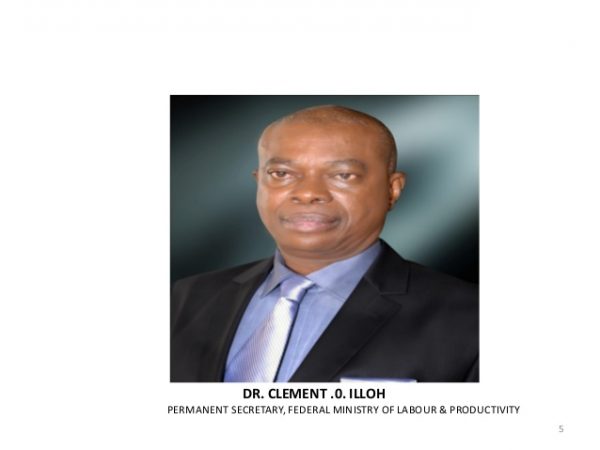 The Economic and Fi­nancial Crimes Com­mission on Monday arraigned the Permanent Secretary, Ministry of Labour and Productivity, Dr. Illoh Clement, for allegedly failing to make full disclosure of his assets.
Clement was arraigned on a three-count charge before Justice Babs Kuewumi of the Federal High Court in Lagos.
The EFCC, in the charge marked, FHC/L/105c/17, al­leged that Clement failed to declare the sums of N97,300,613.44, $139,575.50 and £10,121.52, which were found in his name in three bank accounts.
According to the EFCC, the defendant ‘warehoused’ the monies into his three accounts domiciled in First Bank.
He was said to have com­mitted the offence on April 19, 2016.
The EFCC Prosecutor, Mr. Rotimi Oyedepo, told the court that Clement acted contrary to Section 27 (3) (c) of the EFCC (Establishment) Act 2004.
But when the charges were read to him, Clement pleaded not guilty.
His lawyer, Mr. T.S. Awha­na, urged Justice Kuewumi to admit him to bail on self-recognition or if conditions were to be attached, the court should be lenient as, accord­ing to him, the defendant was diabetic and hypertensive.
Awhana said he had at­tached a medical report to the bail application for the judge to see.
Earlier, the Prosecutor, Oyedepo, had said he had no intention of opposing the bail application as he was more interested in the expeditious trial of the case.
Oyedepo said he was ready to open his case immediately as, according to him, the case was straight forward and he had brought his two witnesses to court to prove the case.
As the EFCC did not op­pose the bail application, Justice Kuewumi admitted Clement to bail in the sum of N50m with one surety in like sum.
The judge said the surety, who must be resident in La­gos, must depose to an affida­vit of means and must show evidence of tax clearance for three years.
Clement was ordered to de­posit his passport in the cus­tody of the court pending the determination of the case.
The judge, however, de­clined Oyedepo’s prayer that trial should commence im­mediately. He subsequently adjourned till May 8, 2017 for commencement of trial while he ordered that Clem­ent should be remanded in the custody of the EFCC pending when he would perfect his bail.