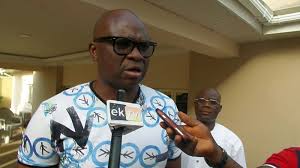 Three young persons have been confirmed dead after a clash allegedly caused by ‎members of a group identified as Federation of Igbara-odo Students’ Union.

‎DAILY POST leant that the union, which allegedly comprises of current students and old students of the community had distributed some pamphlets to residents early yesterday morning.

In the pamphlet, they had demanded from the community monarch, the Arajaka of Igbara-Odo, to know what happened to the money the community realised in the last celebration of the anniversary of the community.

They also demanded inclusion of four of their members in the community’s council of chiefs, and that a new generation bank, which is about to vacate the town, be asked to stay.

Eye-witnesses said that after the youths distributed the pamphlets, they made for the palace of the monarch, and unleashed terror on it.

They vandalised all vehicles on sight there, the palace building and in the process, also attacked the Divisional Police Officer, (DPO) of the town.

It was also gathered that a yet-to-be identified youth, ‎said to be the leader of the rampaging youths, was killed, while a yet-to-identified policeman, was also lynched to death by the miscreants.

His rifle was said to have been taken by his assailants.

Governor Ayodele Fayose, who stormed the area around 6pm yesterday in company of the State’s Commissioner of Police, Mr. Ibrahim Chafe and other security operatives, met with all the people of the town.

Addressing residents of the community, Governor Fayose, who vowed to get to the root of the crisis, as well as arrest all those who had perpetrated the evil, imposed a seven-day curfew, spanning from 7am to 6pm daily.

He said: “this is a very bad development. It is a big shame on the community. I am assuring you that we will get to the root of this matter and ensure that perpetrators are dealt with.‎”