The weekly meeting of  Federal Executive Council( FEC) meeting, which holds every Wednesday did not hold because of the Easter holidays according to the Presidency . 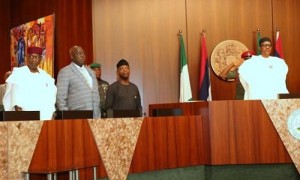 The information was passed to reporters by the Senior Special Assistant to the President on Media and Publicity, Garba Shehu, said this in an interview with reporters when it became clear that the meeting would not hold.

Shehu said the two-day holiday made it difficult for the members of the council’s secretariat to make memos available to ministers two or three days ahead of the meeting as it was the norm.

The presidential spokesman said, “The staff of the council secretariat resumed on Tuesday after the Easter holidays.

“There was no time to prepare and circulate memos to ministers.

“By practice, the ministers receive council memos two or three days ahead of meetings because they must read them and sometimes undertake research.

“It is not a rubber-stamp council, so everyone must prepare themselves well for debates.”

The FEC, which has Vice-President Yemi Osinbajo, all ministers and some top presidential aides as members is chaired by President Muhammadu Buhari.

Members meet weekly inside the Council Chambers of the Presidential Villa.

Journalists who rushed to the Presidential Villa early enough on Wednesday to witness the opening of the meeting were disappointed when they discovered that the meeting would not hold.

Insiders said the meeting was not slated on the President’s schedule for the week at all.

It will be recalled that 74-year-old Buhari was absent at last week’s meeting, fuelling fresh concerns over his health.

A lie was, however, put to the claim when Buhari himself admitted when he returned to the country on March 10 that he had never been ‘this sick’ in his life.