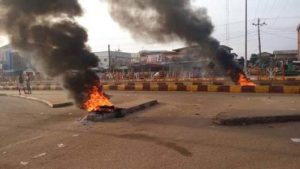 of at least four persons.

Residents of the area told the News Agency of Nigeria that the armed security agents raided the scrap dealers for “engaging in nefarious activities’’.

It was learnt that in the free-for-all, four persons were shot dead while several others sustained injuries.

“They killed four of our men. I am just coming from Isolo mortuary where I deposited the corpse of my brother.

“About 17 other people were injured,” a victim, who identified himself as Sanni, said.

The Police Public Relations Officer, Olarinde Famous-Cole, said the police were at the scene to maintain law and order.