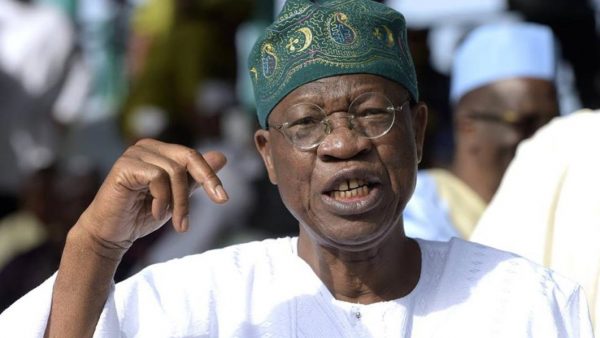 The Federal Government yesterday debunked the reports that the Ministry of Interior was monitoring the phone calls and social media posts of the country’s citizens. A statement by the Minister of Information and Culture, Lai Mohammed described the allegation as another example of disinformation that had permeated the media space.

The Special Assistant to the Minister, Segun Adeyemi, said the intention of those behind the false news was to label the Federal Government as working to stifle the freedom of speech in the country.

He said: ‘’There is no regulation, old or new, from the Ministry of Interior or any Federal Government agency that required the recording of calls or the monitoring of social media platforms such as WhatsApp, Twitter or Facebook.

“We are therefore using this medium to inform all Nigerians that what is being circulated in this regard is totally false and should be disregarded.” He commended all patriotic citizens who had reached out to the government to confirm the authenticity of the information, which is now being widely circulated in the social media.According to the report, all phone calls would be recorded and saved, including communications made through Whatsapp, Twitter and Facebook. It added that all devices had been connected to the Interior Ministry’s systems and urged parents to warn their children against their wrong usage.

The Minister of Communication, Adebayo Shittu also denied such claims. He told The Guardian that he was “not aware of such regulation and I don’t think there could be such. It may, however, has to do with security. But I doubt if there is anything of such.”

A top official at the Nigerian Communications Commission (NCC), who did not want his name in print, said such alegislation could not work in a democratic setting, except in a military regime.

Meanwhile, the Peoples Democratic Party (PDP) has vowed to lead a protest against phone tapping or any indiscriminate arrests made in that regard.