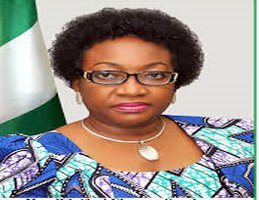 Mrs Winifred Oyo-Ita, Head of Civil Service of the Federation, on Saturday paid N700,000 as hospital bill for a 22-year-old orphan and nursing mother, who was being detained at the hospital.

Oyo-Ita, came in contact with Miss Blessing Clement, who could not pay her maternity bills, while visiting the couple that gave birth to quintuplets at the National Hospital, Abuja.

She said that she would take care of all the bills that Clement had incurred during her stay at the hospital and the woman immediately broke down in tears.

“Wipe your tears and stop crying I am going to pay all your bills and make sure you go home with your baby.’’

The News Agency of Nigeria (NAN) reports that Clement, an orphan, gave birth to a baby boy since February and has been held in the National Hospital because she could not pay her bills.

NAN also reports that the baby who is in the Neo-Natal Intensive Care Unit was delivered at six months through a caesarean section.

Clement, who described the kind gesture of the Head of Service as a miracle, said she was overwhelmed with joy as she would finally be released from the hospital.

She said that there was no end in sight to her predicament as all hope was lost because of her inability to pay the bill.

However, the father of her baby has been soliciting support from various churches but has not been able to raise the amount needed.

She added that a huge load has been taken off her shoulder, praying that Oyo-Ita’s pocket will never run dry and sorrow will be far from her household.

NAN reports that the father of the baby was not present at the hospital at the time of the event.

Clement told NAN that her parents died long ago and she was living in an uncompleted building with her younger ones and husband.

Mrs Maryann Umejiagu, Matron on duty at the maternity ward, said that Clement’s baby was delivered at six months due to life threatening complications during the pregnancy.

She also said that the baby and mother are fine and would have long been discharged but were being kept in the hospital because they could not paid their bills.

The Matron added that God has used the Head of Service to salvage the situation and they would be discharged without further delay.