The Minister of Health, Prof. Isaac Adewole, and the Minister of Education, Mr. Adamu Adamu,have been summoned by the House of Representativesof over the outbreak of an epidemic in Queen’s College, Yaba, Lagos, which has so far claimed the lives of three students

One of the students, an orphan, Praise Sodipo, had died on March 31, after days of undergoing treatment.

Over 1,222 other students were affected by the outbreak, according to a House resolution passed after the Majority Leader, Mr. Femi Gbajabiamila, moved a motion calling for an urgent intervention.

Gbajabiamila recalled that the college had faced a health crisis since January when students returned from their Christmas and New Year break.

He added that the school’s water sources were reported to have been contaminated by pathogens, while there was a general poor hygiene regime on the premises.

The two ministers, along with the Principal of the school, are to explain what steps their respective ministries have taken so far to halt the situation from claiming more lives.

The majority leader’s motion passed by the House, read, “The House is aware that the health crisis in the school has been in the news since the school resumed from the Christmas and New Year holiday in January 2017, and despite this obvious health crisis, the management of the school failed to take appropriate steps to safeguard the students.

“Instead, they concealed the facts, claiming there was no outbreak of an epidemic or death recorded in the school.

“Further aware that the case of Praise Sodipo, one of the students who had been in the intensive care unit until she died on March 31, 2017, is even more pathetic as an orphan and the only child of her late parents, meaning that her family lineage had suddenly seized to exist.

“Concerned that the current situation in Queens College calls for a state of public health emergency in the institution as young lives and future leaders have been lost carelessly with many more endangered; leaving parents in tears and sorrow as the benefits for sending their young daughters to school.”

Meanwhile, in a separate resolution, the House called on the Federal Government to intensify its search for the remaining 195 Chibok schoolgirls.

The lawmakers passed the resolution ahead of the third anniversary of the abduction of 219 schoolgirls from Government Girls’ Secondary school, Chibok, Borno State, which comes up on tomorrow.

The girls were abducted by Boko Haram insurgents, who later released 21 of them.

The whereabouts of the remaining 195 remain unknown.

The resolution was passed after the member representing Damboa/Gwoza/Chibok Federal Constituency of Borno State, Mrs Asabe Bashir, informed members that the plight of the girls remained a source of concern. 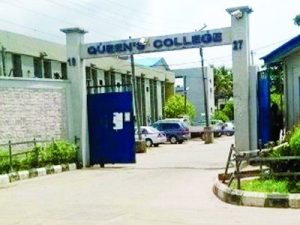