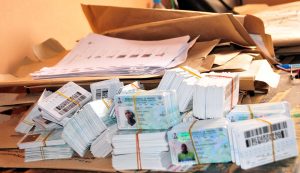 The Independent National Electoral Commission (INEC) has announced that it  may expand its Continuous Voter Registration (CVR) closer to the grassroots for easy access to registration centres.

This was disclosed by the INEC Chairman, Prof. Mahmood Yakubu  said this while flagging on the registration at the Karu Area Council office of Federal Capital Territory, that more than 4,000 staff were deployed nationwide.

Yakubu said the commission was aware of concerns that the exercise should be extended to the wards or polling units, but that adequate logistics were needed to achieve it.

“We want to assure Nigerians that the current exercise is just the beginning; we are considering deploying personnel to cover 8,809 wards and 120,000 polling units.

“We are working on the logistics because this exercise is going to be very huge.

“For the current exercise, confined to 774 local government offices, we mobilised more than 4,000 of our staff.

“If we are to deploy this exercise to the wards, on the basis of five staff per ward, we need to recruit over 44,000 staff.

“If we are to extend it to 120,000 polling units, on the basis of five staff per polling unit, we will require more than 600,000 ad hoc staff for the registration’’, the chairman said.

According to him, since it is going to be all year round, INEC needed to consider the logistics.

“I want to assure that we will go down to the ward and polling units but for a good beginning we need to start from the local government level.’’

He said the commission would do a midterm review of the exercise after six months to look at the success, challenges and how to improve on the exercise.

Yakubu, however, called for the collaboration of stakeholders for the success of the exercise.

He said such collaboration was necessary to prevent registration of underage or foreigner as well as preventing politicians from hijacking the process for personal interests.

“This process is for every Nigerian and it is our collective responsibility to keep an eye on it.

“That is why we are doing it in our offices without involving all and sundry.

“If anybody is found to be underage, do not hesitate to expose such person by reporting to the commission or security agency to immediately apprehended such person.

“The same thing goes for anybody trying to hijack the process.’’

The INEC boss added that those who lost their Permanent Voter Cards or Temporary Voter Cards should also visit the registration centres for replacement.

Yakubu described the exercise as another effort by INEC to consolidate the country’s electoral process.

According to him, it also provides an opportunity for those who yet to register to do so, or collect their PVCs.

“We appeal to all stakeholders, especially the political parties and the media, to help the commission in sensitising the people on the exercise’’, Umar said.

AMAC Chairman, Abdullahi Candido, urged INEC to extend the exercise to the wards or polling units.

Candido said the appeal was necessary as many people reside at communities far away from the local government or area council headquarters.

He urged Nigerians to key into the exercise, adding that the chairmen of areas councils in FCT had already begun sensitisation on the registration.