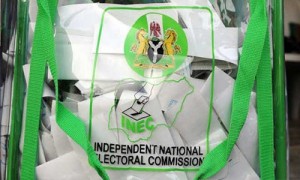 The Independent National Electoral Commission has been advised by the Inter-Party Advisory Council against aiding rigging in the 2018 Governorship Election in Ekiti.

The coalition of political parties advised the two organisations to shun influence from politicians willing to subvert the people’s will, in the interest of peace.

IPAC also passed a vote of confidence in Governor Ayodele Fayose and commended him for his “landmark achievements” and relative peace in the state since his assumption of office.

This were parts of the resolutions reached at IPAC meeting hosted by the factional chairman of the Peoples Democratic Party in Ekiti, Mr. Gboyega Oguntuase.

The All Progressives Congress was not represented at the meeting.

The state IPAC Chairman, Dr Dele Ekunola, who presided over the meeting said there was the need for all stakeholders to avoid a situation that led to the 1983 crisis in the old Ondo State.

“What we expect INEC and police to do is that they must not be dictated to. They must comply with the electoral acts very rigidly. Police and INEC must not be used for electoral fraud because they belong to Nigerians and not any individual.

“They must not force any candidate on Ekiti and this can only happen if they allow the electorate to freely choose their leader because we want Ekiti of tomorrow to be better than today.

“The police, in particular, must not tolerate intruders from coming to Ekiti to foment trouble, because anything contrary to the wish of Ekiti people during the election will cause crisis and what we want is peace before, during and after the election, because we all belong to the same family.

“You can now see that all political parties in Ekiti are one. We operate like a family. If you look critically, there is no inter-party crisis and this is how IPAC has been operating at the federal level and it will go down to the ward level because Nigeria and Ekiti need peace and unity.”

Oguntuase, who praised IPAC for brooding on how Ekiti could achieve peace, said the revolutionary transformation being carried out by Fayose would continue.

He appealed to APC to give peace a chance to forestall the programmes from being truncated.

He also canvassed support for Fayose’s government in view of the alleged attempt to review the April 14, 2015, Supreme Court judgement, which validated the governor’s electoral victory.

“Nobody should be allowed to throw out Fayose who was popularly elected by the people,” he added.