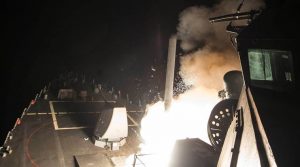 Syria have lost a large number of persons following the US military strike on a Syrian airbase, according to the governor of Homs province where the Shayrat base is located.

“There are martyrs, but we don’t yet know the number either of martyrs or of wounded,” Talal Barazi told AFP by telephone.

He said parts of the base were on fire and some of the wounded were suffering from burns.

“It will take some time to determine the extent of the damages,” he said.

“Of course we condemn this, all action targeting Syrian military bases is condemnable,” Barazi said.

He said the forces present at the base “provide important support” in the battle against the Islamic State group in the Palmyra region, home to a famed desert city that Syrian troops recaptured from jihadists last month.