Deolu
A female coach of a national Basketball team has caught the admiration of many as she made her introduction during the FIBA AfroBasket 2017 Group C Qualifiers. 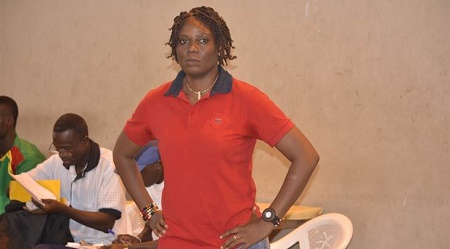 Benin may not have qualified for the FIBA AfroBasket 2017 Final Round, but the team etched its name in the sand of times due to head coach Brigitte Affidehome Tonon.

While Tonon’s name may not be popular in basketball circles, she surely has her path clearly laid out as the first female head coach of a men’s national team on the African continent, after making her introduction during the FIBA AfroBasket 2017 Group C Qualifiers.

There have been cases of female coaches taking charge of men’s teams at club level and winning national titles.

But it is Tonon who no doubt has made history in coaching by this singular feat. It shouldn’t come as a surprise given that her father, Pierre Coffi Tonon, has a rich basketball history.

He is the current Secretary General of the Federation Beninoise de Basketball (FBBB) and has been a respected technical hand in coaching, refereeing and a FIBA match commissioner.

By virtue of having a parent with such an impressive basketball CV, Tonon learnt on and off the court and has contributed immensely to her growth in the game coupled with her professional career as a coaches’ instructor at the Benin Sports Institute in Porto Novo.

Early this month, she made a statement to announce her arrival into the exclusive world and men dominated coaching field by leading Benin men’s team to a historic 69-61 win over Burkina Faso.

While she and her wards travelled to Abidjan for the second leg of the regional qualifier with a 1-1 record, they failed to win any game in the Ivoirian city. 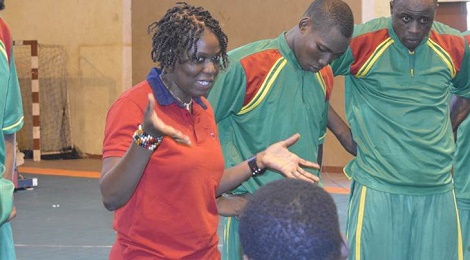 Tonon insists the experience was worth it. Talking to FIBA.com in Porto Novo’s Hall Des Arts where the first leg of the regional qualifier took place, she shed light on the experience.

She does not see herself as a woman when she is coaching a men’s team. “I see them as players that I am working with and nothing more,” she said.

“That they are men and I am a woman does not bother me. Coaching is coaching and there’s no two ways about it. I just do my job and that’s it. I don’t allow myself to be intimidated by them.

“As much as possible, I try to relate with them for us to get the job done and that’s where it ends. I respect them and they accord me the same.”

Tonon’s assistant, Basile Comlan Klegou has no problems working with a woman as the head coach. For him, it’s all in the service of the nation.

“I have a good working relationship with her and I give her the cooperation she needs, my observations during practices and games. The important thing for me is that I am rendering service to my country and the capacity I serve doesn’t matter.”

Romaric Quenum, the captain of the Benin men’s national team,  spoke glowingly about his head coach. “It was my first time to play on a team with a woman in charge of the team but I must say that she did not do badly,” Quenum explained. “She likes taking charge just like any male coach would, and always wants the best for the team. It was nice working with her on the team.”