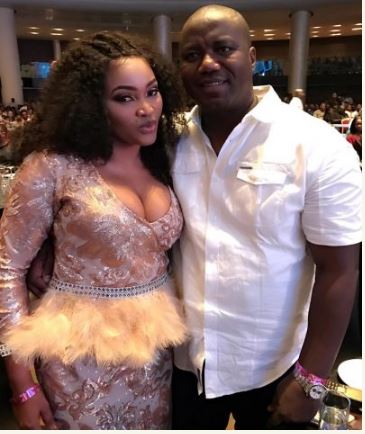 Lanre Gentry, an American returnee who is into the hospitality business (he also sells cars) was said to have had three women, who all bore children for him before meeting and marrying Mercy Aigbe.

His first wife had just daughters then and he named Opeyemi’s son, Lanre. It was gathered that the boy is 18 years old, lives with his grandparents in Egbeda, Lagos while his mum is abroad and remarried with two other children.

Lanre, after Opeyemi, dated and married an Igbo policewoman who had also packed out of the house.

According to reliable sources, Mercy started dating him after his spilt from the policewoman and must have decided marrying him when he spoilt her silly with gifts and money. In fact, he was said to have gifted her with two cars (a Honda Element and Honda CRV) on the same day!
They were officially married in 2013.

Meanwhile, Mercy had always said in interviews that she was the second wife.

“How can she be the second wife when she is the fourth to bear children for him? He has children from different women and when Mercy had Juwon, Lanre called all his baby mamas that they should bring all his children to come and live under same roof with one another in his house but those women declined. The many responsibilities must have also contributed to his financial misfortune because he is not as rich as when Mercy met him,” a reliable source said.

One of the reasons that caused fracas in his marriage to Mercy was infidelity from his part. It was gathered and alleged that Lanre was dating Opemititi, a young lady, who lives in Abeokuta but comes to Lagos regularly.

The lady also known as “Queen Stunner” was said to be very close to Mercy and visited her at home. There are allegations that the estranged husband of Mercy is having an affair with Opemititi.

For now, Mercy is said to have been separated from Lanre and moved out of the home.