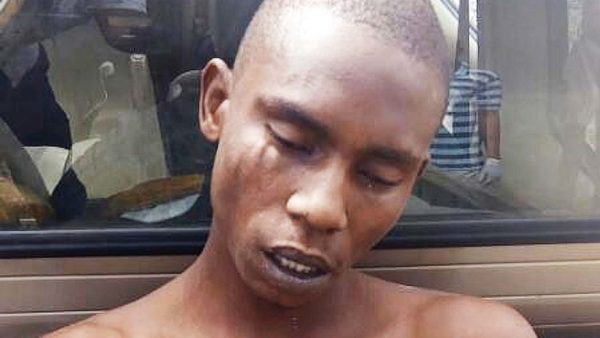 The Inspector General Of Police Intelligence Response Team (IRT) has shot dead a notorious member of the militant group that killed four policemen and an army captain at Isawo, Ikorodu area of Lagos State.

The kingpin, Endurance Ominisan, known in the underworld circles as ‘Mighty’ was shot dead on Easter Sunday after a fierce gun duel with IRT operatives, led by ACP Abba Kyari at Ibeshi area of Ikorodu.

The operatives had been monitoring the home of one of the kingpin’s girlfriends, which he rented for her. The police ambush paid off as he came out from the creek to celebrate Easter with his girlfriend.

The police cordoned off the house, but the hoodlum climbed the roof of the house where he opened fire on the operatives. The police engaged him in a shoot-out after which he fell from the roof.

A police officer, who spoke on the condition of anonymity said: “On the way to the hospital, Mighty named other members of the gang and confessed to their involvement in the killing of policemen, soldiers, the kidnapping of Turkish schoolgirls and other kidnappings, but died a few hours later in the hospital.”

The Inspector General of Police, Ibrahim Idris, who confirmed the death, said other arrests have been made. The IGP, who spoke during a working visit to the Lagos State Police Command, Ikeja, yesterday, warned that none of them would go scot-free.

Idris, who was represented by the Deputy Inspector General of Police (DIG) in charge of ICT, Foluso Adebanjo, said: “One Endurance Ominisan, aka Mighty, a native of Arogbo in Ondo State, came out from the creek to visit his girlfriend in a house he rented for her at No. 20, Joel Adebolu Street, Ibeshe in Ikorodu and IRT teams immediately swooped on him and surrounded the house. On sighting the team, the kidnapper escaped to the roof from where he fired several shots with his pistol on the IRT team, who swiftly returned fire and fatally wounded him.”

The DIG charged his men to use every means available to arrest other members of the gang. “They must pay for it. We want them dead or alive. Nobody will kill a policeman and go scot-free. No, they would not escape justice,” he said.

Meanwhile, the Lagos State government has held a one-day public enlightenment to sensitise citizens on the Kidnapping Prohibition Law enacted earlier this year by the state assembly.

Speaking at the programme, the Special Adviser to the governor on Civic Engagement, Kehinde Joseph, described as a dangerous trend the act of forcefully holding innocent persons against their will with the intention of extorting money from them and their relations. He observed that this menace has led to several loss of lives. He called on Lagosians to be vigilant, know the people around them and report strange activities in their domain to law enforcement agents.

Also, the Director, Legal Department, Office of Civil Engagement, Mrs. Taiwo Balogun, said that the government deemed it necessary to sensitise the people, as ignorance is no defense before the law. She revealed that the state government has embarked on the simplification of the law into Yoruba, Egun, and Pidgin English to enable Lagosians understand the simple letters of the law.