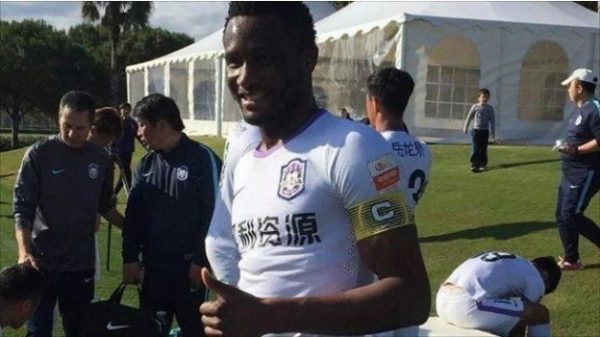 The Captain of the Super Eagles, John Obi Mikel, scored his first goal for Chinese side, Tianjin Teda, to power them to a 2-0 win over Chongqing Lifan in the Chinese Super League.

Mikel recovered from a knock that was supposed to keep him out for ten days, and was handed a start by Coach Jaime Pacheco, who also picked Mikel’s Nigeria national team teammate, Brown Ideye to lead the attack.

The former Chelsea ace who plays as a central defensive role for the team, showed his instinct in the 48th minute when he reacted quickly to tuck home the opener for his team after the Lifan goalkeeper parried a well hit drive from Mbaye Diagne.

The 29 year old proved his effectiveness at both ends of the pitch as he made two vital clearances to deny Lifan goal scoring opportunities.

He however had an injury scare in the 90th minute, when he went down unchallenged and had to be taken off the pitch for medical attention with what looked like a re-occurrence of the injury that he suffered in the earlier game.

However it proves not to be the case as he returned back to the pitch and lasted the entire duration of the game, while Ideye was substituted after 65 minute further extending his wait.