Fake drugs worth N29 billion have been destroyed by the National Agency for Food and Drug Administration and Control in the last three years. 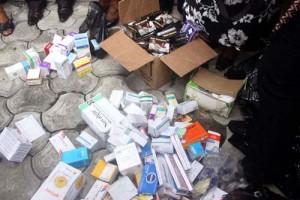 This Statistics was released by the Director, Special Duties, Dr Abubakar Jimoh in Abuja, he  explained that in December 2016, fake drugs worth N9.6bn were destroyed in Port Harcourt, Rivers, in an operation carried out in conjunction with the Nigeria Customs Service.

He described counterfeit drugs as worthless and valueless, adding that the N29bn is what would have been made from sales if the drugs had succeeded in flooding the Nigerian markets.

He said, “Counterfeit drugs, as far as we are concerned have no value; but those engaged in this dastardly act would have made N29bn in the last three years.”

Jimoh said that seven persons were convicted in the last two years, for various drug offences.

He said that a lady, among the fake drugs merchants, bagged seven years imprisonment without an option of fine.

The director said that the conviction was the highest punishment handed to any counterfeiter in recent time.

Jimoh, who is also NAFDAC’s spokesman, said that the organisation currently has not less than 50 drug offences cases pending in various courts of law across the country.

The official expressed the hope that the courts would convict more dealers of fake drugs to serve as a deterrent to others engaged in the nefarious business.

He said the agency was determined to get rid of counterfeit drugs and other fake products from the country and urged Nigerians to be vigilant and serve as `NAFDAC agents’in exposing the perpetrators.