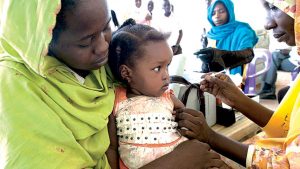 Deputy Governor of Kogi State Elder Simon Achuba, has called on all  19 Northern state governors to embark on an aggressive sensitisation in addressing the outbreak of Cerebrum Spinal Meningitis.

Achuba said this while addressing the Northern Governors/Traditional Rulers in a meeting convened by the Sultan of Sokoto, Alhaji Muhammadu Sa’ad Abubakar III, to address the prevalence of the disease.

According to the Deputy Governor, the North is most vulnerable to the disease.

He therefore called on leaders in the North to embark on a vigorous sensitisation and awareness in addressing the issue before it gets out of hands.

He said, “One of the causes, is a practical example of a place I went and saw a family of about 30 persons in a room with a very tiny  window, and that alone can cause a serious heat among the occupants which may metamorphose to CSM.”

He advised that a house style where people live or reside should have good ventilation, which is one of the causes of the disease.