A heartless mother buried her  new born baby in a shallow grave, leaving the child helpless to die. 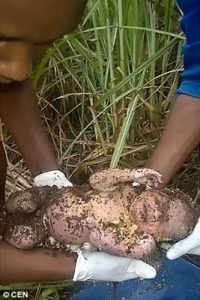 ge of the newborn baby boy still covered with dirt, after being rescued from the shallow grave at a farm in Paddock, South Africa, last Thursday has gone viral on the internet.

The 25-year-old mother, originally from Izingolweni, had left the infant among some timber, covered with sand, at her workplace after she had given birth last Tuesday.

The police said the baby was found after staff at the timber factory where the mother was employed heard a baby crying on Thursday.

It was gathered that it was the mother’s second child, and she felt her parents would not approve of another baby.

The baby was taken to Port Shepstone Regional Hospital where he was admitted at the intensive care unit.

The mother was also taken to hospital and was released on Monday.

The mother was charged with child abandonment before the Izingolweni court on Wednesday.

Hospital officials have reported that the baby was in a stable condition as at Thursday.