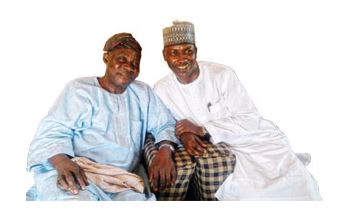 FOLLOWING the success recorded in a short while of the federal government’s Whistle Blower policy, the newly appointed Executive Director of the National Film and Video Censors Board, NFVCB, Alhaji Adedayo Thomas has revealed plans to introduce similar policy in his agency. Thomas made this revelation, Tuesday, while on official visit to the Lagos office of the board. He also paid a courtesy visit to one of Nigeria’s foremost film makers, Chief Eddie Ugbomah, in his quiet Ilogbo-Eremi country home along Badagry Road, Lagos. Eddie Ugboma and Alhaji Adedayo Thomas Addressing members of staff, the Censors Board boss said, he would soon introduce the whistle blower policy in the board whereby a staff receives a certain percentage of any business he or she generates using their contacts. He challenged staff of the board in the South West Zone to think out new ways of generating revenue for the body, stressing that he wants an aggressive revenue drive without being a burden on the stakeholders. Thomas said he was not happy with what he saw on ground when he assumed duty at the head office in Abuja, stressing that he was scared by the signals he received from the staff, as he was not a messiah. According to the NFVCA boss, the reception he received was an indirect signal about the enormity of the job at hand. Speaking further, he stated that he was frightened by the enormity of the job at hand, but assured the staff that everybody must buckle up to move the Board forward. Thomas, however, challenged the staff to come out with ideas, on how to move the Board forward, adding, “I want a turnaround in the Board within 90 days, rather than the customary 100days.” Thomas succeeded Ms Patricia Bala as the Executive Director of the board.