The Nigerian Army has confirmed the death of one of its Soldiers and four policemen in Ikorodu,  Lagos  State.The officials were killed in an ambush by suspected criminal gangs in Ishawo Community in Ikorodu. 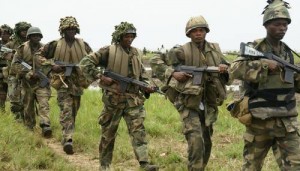 The statement read, “At about 3 a.m. on Sunday, April 9, a patrol team led by a Nigerian Army officer responded to a distress call.

“The distress call was from the police requesting for reinforcement because some suspected criminals had invaded Yewa Community, Isawo in Ikorodu, Lagos State and abducted some persons.

“The combined team in a swift response was able to successfully foil the kidnap attempt and rescued all the abducted victims.

“Nine of the victims, including an infant of about two years old were rescued from the criminals.

“However, on their way back, they were ambushed by a suspected criminal gang.

“During the clearance of the ambush, unfortunately four policemen lost their lives while the army officer who led the operation sustained gunshot wounds and died on the way to the hospital.

“Similarly, four of the rescued victims of the kidnap, including the infant, sustained injuries during the encounter.

“They have all been evacuated to a hospital and are responding to treatment,” the statement said.

It added that the Commander, 9 Brigade, Brig.-Gen. Elias Attu and Commissioner of Police, Lagos state, Mr Fatai Owoseni, had assessed the situation and gave impetus to the pursuit of the fleeing criminals.

“Meanwhile, a combined team of the Police and military is in hot pursuit of the suspected kidnappers who fled the scene carrying the dead bodies of their colleagues and the wounded.

“The combined team is on their trail as they have vowed that the death of the gallant officer and men of the Nigerian Police who fought bravely for the success of the operation will not be in vain.

“We would like to use this medium to implore anyone with useful information to come forward.

“We are also reassuring the general public, especially the residents of Isawo community in Ikorodu, of their continued safety,” the statement said.

The News Agency of Nigeria had earlier reported that militants struck at Woodland Estate close to Ishawo Creeks and engaged security personnel in a gun duel.

It was unclear if there were any casualties on the part of the militants, although security forces were said to have reinforced and stormed the area for reconnaissance and possible counter-action.

It also reported on March 13 that the militants returned to the area, and the residents were living in fear.

The militants, whose trade are kidnapping and oil theft, were chased out of the area in Aug. 2016 by the state’s Task Force, after several bloody clashes in the community.