The Indian authorities have arrested a Nigerian identified as Ugochukwu John Nnadi who was caught peddling drugs.

The Nigerian was apprehended 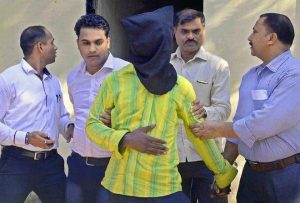 by the Anti-Narcotics Cell of the Navi Mumbai police on Thursday afternoon for trying to sell mephedrone rock and powder.

Reports in India news media said about 25 grammes of the drug in powder form and 85 grammes in rock form, together estimated to be worth around ₹3.30 lakh (about N1.6m), were seized from him.

The 37-year-old was arrested after a tip-off.

According to Inspector Maya More, the police laid traps in Koparkhairane, where Nnadi usually carried out his activities, and on Thursday he walked into the trap.

“When he realised that we were police officials, he tried to escape. After a struggle, we caught hold of him. We found some pav in his possession, and on opening it, we found the drugs hidden inside,” More told the Hindu.

Police found that Nnadi arrived in India three years ago on a business visa where he started trading in women and children’s clothing. The visa has now expired.

He later started peddling drugs to make easy money. Nandi has been remanded in police custody till May 5.