The Commander of NNS Delta, Ibrahim Dewu, disclosed this while parading the suspects at Focados River, Burutu Local Government Area of Delta on Wednesday.

The suspects are one Nigerian, two Pakistanis, three Ghanaians, one Indonesian, one Béninois and two Ukrainians.

Mr. Dewu said that the suspects were caught in the early hours of Tuesday while siphoning crude oil into the vessel from Afremo A platform, a loading jacket belonging to the Shell Petroleum and Development Company (SPDC) in Forcados River.

According to him, they had siphoned about 2000 metric tonnes of crude oil from the loading jacket before they were caught.

“They are one Nigerian, two Pakistanis, three Ghanaians, one Indonesian, one Béninois and two Ukrainians, the Nigerian among them is the Chief Officer while the Captain is a Pakistani.

“This vessel has been around our water, what they do is that they go into the high sea during the day, they come late night and connect to the Jacket and siphon crude oil.

“We have been trailing them for three days, this is the forth night and the vessel is fully ladened with illegal crude oil and this is what they keep doing,” he said.

The Commander said that the feat was the outcome of the ongoing “Operation Delta Safe Operation River Sweep Two and Operation Tsare Teku” mandates of the Chief of Naval Staff (CNS).

He said that the navy would continue to check illegalities in the nation`s maritime domain.

“Most of the oil companies have service boats, so they should make it a point of duty to keep watching these jackets both day and night,” he said.

Mr. Dewu said that the suspects and the vessel would be handed over to the prosecuting agency after investigations.

One of the suspects, a Nigerian, said he joined the TECNE company in 2016 adding that he was directed by one Mr Victor to load crude oil from the jacket.

The captain of the ship, said he was not aware that their action was illegal. 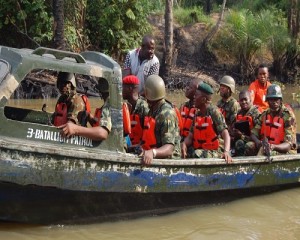