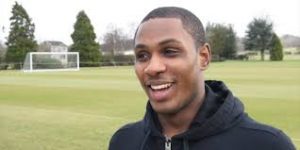 Odion Ighalo is set to make a quick return from his ankle injury, which is good news for Nigeria ahead of their 2019 Africa Cup of Nations qualifier against South Africa.

The former Watford player suffered the knock 10 days ago in Changchun Yatai’s 3-2 loss to Shanghai Shenhua in the Chinese Super League.

It was initially feared that the player would be unavailable for the Super Eagles when they tackle Bafana Bafana in early June, but fortunately the injury was not a major one.

In fact, Ighalo is expected to return to full training with Changchun Yatai early next week.

“I have started my rehabilitation, started working in the gym and swimming pool. I will be back next weekend,” Ighalo told allnigeriasoccer.com. “From Monday I can run and train with the team.”

Ighalo will hope to be included in Nigeria coach Gernot Rohr’s squad, which is set to be named in May.