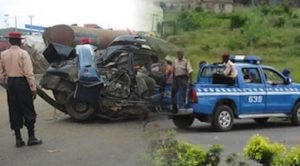 Two lives where lost while several others where left injured as a fatal accident occurred on Saturday claimed along the Abeokuta – Siun – Sagamu expressway.

According to an eye- witness report, he said the auto crash, which occurred around 3:45pm in front of the Police ICT College located few metres away from Kobape village, involved three cars and an Abeokuta-painted Toyota Carina taxi cab marked (Ogun) ABG 810 XA.

He said the driver of the Toyota Sienna car which was coming into Abeokuta, lost control of the car, skidded off its lane, with burst rear tyres, and crashed into the three other vehicles going outward Abeokuta to the Sagamu inter-change axis.

Mr. Akinbiyi said the two victims died on the spot, while other commuters sustained varying degrees of injuries in the crash.

He said a three-day old baby was rescued alive notwithstanding that her father and one other person died. The mother sustained legs injuries.

The Agency’s spokesperson said the rescue team of the agency evacuated nine victims to the Federal Medical Center (FMC), Idi – Aba in Abeokuta, while good spirited Nigerians assisted in evacuating other unspecified numbers of victims who were critically injured to the State Hospital in Ijaye, Abeokuta.