According to the reports coming from Ile-Ife, Osun State,the Ooni of Ife, Oba Adeyeye Ogunwusi, has forgiven the Oba of Lagos, Oba Rilwan Akiolu, who allegedly snubbed him at a public function in Lagos on Tuesday according to the Laroka of Wanikin-Ife, Oba Kole Ojutalayo

Oba Ojutalayo, who is also the Chairman of ‘40 New Dawn Oba’ in Ile Ife, said Oba Akiolu would be given a warm embrace anytime he visited the Ooni in his palace.

Speaking in an interview with our correspondent in Osogbo on Friday, Ojutalayo said the Ooni was interested in the success of his unity project than any battle of supremacy, adding that Ogunwusi would not stop respecting Akiolu in spite of the incident.

He said, “There has been so much said about what happened between Oba Akiolu and our father, the Ooni of Ife. We must look at it from the standpoint of the Ooni, who is holding in his hand the mantle of peace and in word and deed, he remains a man of peace. I am sure in his heart, he has already forgiven Oba Akiolu.

“This is another history and it is always in the making, but there is nothing sweeter than having peace and at the end of the day, when the Oba of Lagos comes to Ife, it will be with warm embrace from the magnanimous heart of the Ooni.”

The monarch noted that Oba Akiolu was like a big brother to Oba Ogunwusi before he ascended the throne.

Ojutalayo advised monarchs to refrain from acts that could show them in a bad light, especially in public. 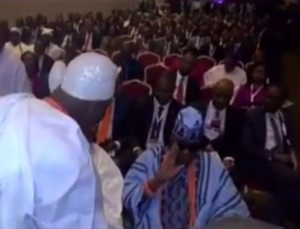