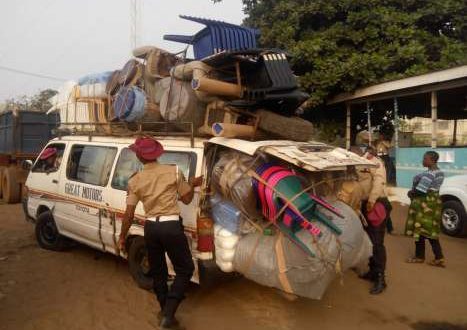 The Federal Road Safety Corps Marshal, Boboye Oyeyemi, has identified overloading of commercial vehicles travelling at night as the major cause of the most fatal road accidents being recorded in recent times.

Mr. Oyeyemi told journalists in Abuja on Thursday that the overloaded commercial vehicles were the highest contributors to fatal night accidents

“One key issue we are battling with has to do with overloading of unregistered commercial vehicles, especially Golf and Vetra, and it is more common along the middle belt area.

“This normally occurs at night in an attempt by the drivers to avoid enforcement agencies, especially trucks used in carrying passengers when they are supposed to convey only goods.

“As a result, the pattern of crashes is now moving toward evening. Most of the fatal crashes recorded of recent occurred at night,” he said.

Mr. Oyeyemi said the FRSC was intensifying its public enlightenment, education and advocacy efforts to tackle the problem of overloaded commercial vehicles travelling at night and killing passengers and other road users.

The corps marshal further said most of the accidents recorded in the country since the closure of the Abuja international airport occurred on the Abuja-Kaduna road.

According to him, the accidents were speed-related and involved mostly private vehicles, which are not affected by the ongoing enforcement of installation of the speed limiting device.

He gave statistics showing an upward trend in road traffic accidents involving private vehicles nationwide, and a decrease in cases involving commercial ones.

The News Agency of Nigeria reports that the ongoing enforcement of the installation of speed limiting device, which began on February 1, applies to commercial vehicles only.

“My concern now is the issue of speed on the highways which we are battling with. I must raise this concern.

“For the work done so far on Lagos-Ibadan Road, we need to bring in more radar guns, same for the Abuja-Kaduna corridor which is in good state now.

“You know that the better the roads, the more the speed. So, we need full enforcement and more radar guns to clamp down especially on private vehicles noted for speed violations.’’

While appealing to road users to exercise restraint especially during the Easter celebrations, Oyeyemi said the agency had extended its operational hours to 10 p.m. within the period.

“We have improved on our rescue services. We have more ambulances now, and are ensuring prompt removal of obstructions on the highways.

“We will continue to put in our best with the government support that we are getting. It behoves on the road users to show discipline on the highways,” he said.
Source: NAN