Lawal said, “Our Surveillance Committee has reported two patients in the Hausa Community of Ojoo area of Ibadan, who manifested some symptoms of CSM.

“The two suspects arrived Ibadan from the Northern part of the country and they manifested some symptoms of CSM. 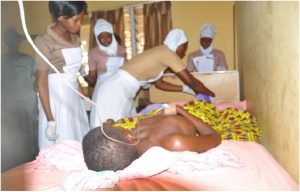 “We have beefed-up tracking and increased surveillance efforts in all primary health care centres at the local government levels, secondary healthcare level and all the private hospitals around Ojoo.

“Oyo State Government is making spirited efforts to ensure that officers at the Disease Notification and Surveillance Unit are working assiduously to monitor the suspects.

“As soon as we get the alert from the state office, we will immediately alert the Disease Notification and Surveillance officers in the 33 local government areas of the state.

“I can say that Oyo State is fully equipped and ready to prevent or curb the scourge of any outbreak of meningitis in the stat.”

Lawal explained that there was a collaboration between the state Ministry of Health, Disease Control Unit and all the 33 local government health offices.

“We hold meetings every first week of the month where we analyse reports from these local governments.

“The local government officer concerned usually sends alerts to us at the Ministry of Health, we, in turn, inform the National Centre for Disease Control, a unit of the Federal Health Ministry.

“The Federal Ministry then alerts the WHO office and Presidency at the same time. So, we are on top of events in Oyo State,” he said.

According to him, the type of meningitis recorded in Oyo in 2014 is different from this year meningitis; the 2017 CSM is “Zero Type C’’.

He said that the state government had requested for vaccines from the Federal Ministry of Health.

“This is the appropriate body responsible for ordering and procuring vaccines for the treatment, prevention and management of communicable diseases.”

Also, the Director of Hospital Services in Oyo State, Dr Mercy Popoola, said that the state was committed to containing the CSM Zero Type C in the state.

She said that Radio and Television stations were involved in the discussion programmes and jingles to educate the people on prevention, treatment and control of communicable diseases.

In his remarks, Mrs Modupe Aina, the Director, Public Health Nursing, University College Hospital (UCH), Ibadan, said that the hospital had started sensitisation campaigns in 11 health centres in the state.

Also, Prof. Temitope Alonge, the UCH Chief Medical Director, said that the hospital was in collaboration with other two levels of healthcare delivery in the state.

“In the area of clinical services, we are prepared to tackle any case of CSM, should it be referred to the UCH,’’ Alonge said.

He advised the youth to avoid kissing and close prolonged contact with CSM patients.

According to him, people should sleep in a well-ventilated place, ensure proper disposal of respiratory and throat secretions and strict observance of handwashing.

“Others are; avoidance of sneezing into elbow joint and sleeves, reduce handshaking, kissing, sharing utensils or medical interventions like mouth resuscitation and avoidance of self-mediation,” he said.

Alonge said it was a sad development that the country was experiencing an outbreak of CSM which had spread across the country.

“These states fall within the African meningitis belt.

“The larger African meningitis belt consists of 26 countries that stretch from Senegal, Gambia and Guinea-Bissau, in the west coast to eastern countries of Eritrea and Ethiopia,” he said.

Alonge said that Nigeria had witnessed worst cases of meningitis, adding that the previous epidemics were caused by “Neisseria meningitis type A’’.

According to him, this new epidemic we are recording presently is a “Neissria Meningitis type C’’.

He said that the WHO instituted mass vaccination campaign using the new conjugate vaccine called the “MenAfriVac-A’’ in about 16 out of the 26 countries, including Nigeria.

Alonge said that this resulted in a considerable reduction of the type meningitis in most countries.