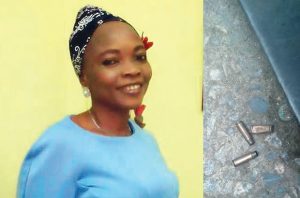 The protesters had dumped the cpse of the deceased at the Olosan Police Station on Tuesday when the policemen allegedly shot and fired tear gas at the crowd.

Reports had it that in the melee, many residents were injured, while three people sustained gunshot injuries and were rushed to different hospitals for treatment.

It wss gathered lthat three policemen alleged to have been involved in the killing of Adebayo had been arrested and transferred to the State Criminal Investigation and Intelligence Department, Yaba.

Our correspondent gathered that some policemen attached to the Olosan division had on Tuesday trailed a suspected fraudster to the Tollgate area of Mushin.

The suspect was said to have resisted arrest and mobilised his friends, who attacked the cops. The policemen reportedly called for reinforcement from the division.

The new police team deployed in the scene was said to have opened fire to disperse the attackers.

However, a stray bullet allegedly hit the victim in the head while she prepared to fry yam cake (ojojo) for her customers around 6pm.

The mother of two was said to have slumped and died.

When our correspondent visited the scene on Wednesday, thick bloodstains were observed where Adebayo breathed her last.

Grated yam flour, groundnut oil, and other items of her trade, were still in the place she left them, as a crowd of sympathisers called for justice.

It was learnt that the corpse had been deposited in the Mainland Mortuary, Yaba.

Her sister, Adenike Fatai, identified the policemen involved in the killing as Charles and Prince.

She said, “Some policemen on motorcycles trailed a man to Tollgate. They accused him of being a yahoo boy. They wanted to arrest him, but the man put up a fight against them.

“They called for reinforcement and that was how their colleagues came in a patrol van and started shooting indiscriminately. They fired more than 20 bullets. My sister, who was about to fry ojojo, was hit by a bullet. She fell and died.

“A motorcycle rider went to challenge Prince, telling him a woman had been hit by their bullet. Prince shot him as well in the leg. The policemen were six in number.”

Our correspondent, who went round the community, saw expended bullets on the floor.

Fatai claimed that when the police opened fire on the protesters at the police station, many people were injured, including a boy who was beside a filling station.

“The police were asking us why we would bring a corpse to the station. They shot and used tear gas on us. The police must bring the killers of my sister to justice,” she added.

Our correspondent learnt that the deceased, whose husband died some years ago, was survived by two children.

A worker with the National Railway Corporation, Babajide Idowu, lamented that policemen stationed at the Tollgate area to maintain law and order were fond of extorting motorcyclists.

“The woman they killed was like a mother to me. My post is beside where she sold ojojo. I am in shock. It could have been me,” he added.

A police source said three cops had already been arrested in connection with the incident.

He said, “From investigations, those policemen were on official duty. They saw a suspect carrying a black nylon bag. Immediately the suspect sighted them, he passed the bag to another person, who quickly fled the scene. Nobody knew if it was a gun or a bomb that was in the bag.

“The motor bike policemen, who attempted to arrest the suspect, were attacked by a mob with bottles, stones and petrol.

“Those policemen then called for reinforcement. The new team tried to disperse the mob by shooting into the air.

“By the time they got back to the division, the mob came to attack them again, bringing a woman whom they claimed was shot dead by the police.”

The state Police Public Relations Officer, ASP Olarinde Famous-Cole, said investigations were ongoing, adding that some of the policemen had been arrested