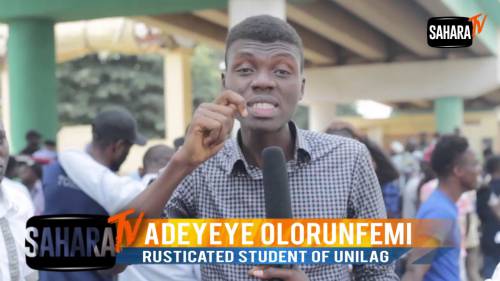 Fourteen student activists of the University of Lagos (UNILAG), including  Adeyeye Olorunfemi, were on Saturday arraigned before a Mobile Court in Oshodi by the Police. Olorunfemi, a UNILAG student, became famous for being vocal against repressive actions of the Professor Rahman Bello-led management of the institution.  Adeyeye and others were arrested on the campus yesterday while returning from the office of the Dean of Student Affairs (DSA), who was said to have refused to speak to the students.

The students had gone to seek explanations on the recent rustication of a visually-impaired student, Lawrence Success, and Ochuba Polycarp, who the institution said it rusticated despite having graduated.    But instead of an audience, what the got was arrest by policemen who were working in concert with the campus security officers. Adeyeye was arrested outside the campus.

The student activists were detained overnight at the State Criminal Investigations Department Panti in the Yaba area of Lagos and early on Saturday, taken before a Mobile Court in the Oshodi  and charged with “breach of public peace.”
Presiding magistrate, Mr. Peter Nwaka ordered the students remanded in Kirikiri Maximum Security Prison until 6 April.