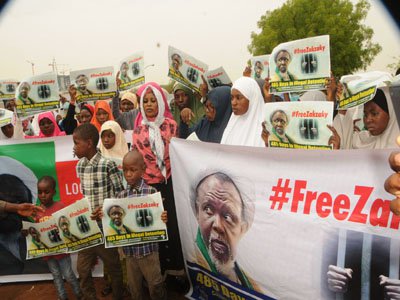 The police in Abuja yesterday dispersed supporters of the detained Shi’ite leader, Ibraheem El-Zakzaky, who were protesting his continued detention.
The protesters, who converged at the unity fountain, turned violent after the police sprayed teargas at them.
It was gathered the police resorted to teargas after attempts to disperse the protesters with water failed.
Former Chairman of the National Human Rights Commission (NHRC), Prof. Chidi Odinkalu, who addressed the protesters, advised the Federal Government to respect the rule of law by releasing El-Zakzaky.