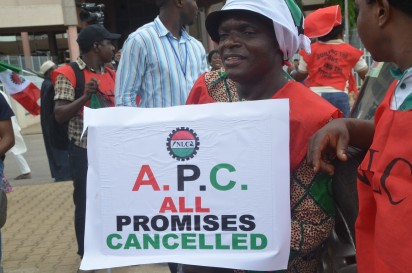 Faced with dearth of funds, the ruling All Progres­sives Congress (APC) has suspended indefinitely, its na­tional convention slated for this month.
The party’s decision to post­pone the convention was alleg­edly caused by the failure of the Presidency and the governors elected on the APC’s platform to fund the party and the con­vention.
The APC has remained a divided house after the conduct of the Ondo state governorship election, primarily where the group loyal to the party’s Nation­al Leader, Ahmed Bola Tinubu, alleged sharp irregularities by the National Chairman, Chief John Odigie-Oyegun and his group, to favour Rotimi Akered­olu against Tinubu’s preferred candidate, Olusegun Abraham.
Akeredolu eventually won the election and has since been sworn in as the governor of Ondo State.
Investigations revealed that the APC National Working Com­mittee (NWC) had been aban­doned by major stakeholders as the party is grossly underfunded.
The paucity of funds, it was gathered, had left the party in se­rious jeopardy to the extent that the APC cannot pay the salaries of its workers, who have threat­ened to down tools.
Indications emerged on Monday that the national con­vention of the party slated for April 29, 2017 would no long­er hold following the resolve of the governors not to bank­roll it.
Also affected is the party’s Constitution Review Commit­tee, which is expected to sub­mit its report before the abort­ed convention. It was gathered that the committee had aban­doned its duty following the in­ability of the NWC to fund it.
Party sources said that a committee put in place to han­dle the national convention has not started work because there is no financial backing for it.
Also, the national chair­man, it was gathered, had vis­ited some state governors and other stakeholders soliciting their support to hold the non-elective convention in Abuja.
The party, after being criti­cised for not holding a nation­al convention as stipulated in its constitution, declared in a statement that it will hold a national convention not later than April this year.
It was however learnt that the decision was challenged by one of the APC governors from the North West zone, who at a meeting of the NWC last month, told Odigie-Oyegun that his leadership of 20 NWC members cannot fix a conven­tion date for 97 National Exec­utive Committee (NEC).
“The Presidency and gov­ernors who are supposed to be the backbone of this party have abandoned it after riding on its back to win elections in 2015.
“It has become clear that the planned national conven­tion can no longer hold. With barely three weeks remaining, there is nothing on ground to show we are preparing for such. Also, the Constitution Review Committee is expected to sub­mit its report which will play a major role in the convention.
“As I talk to you, nothing has been heard from the com­mittee. It has not being mobi­lised and has since abandoned its job,” an APC chieftain said.
Further investigation re­vealed that both the governors and National Assembly mem­bers have developed fears and suspect on the NWC members, in the face of the unending cri­sis in the party, even as there have been reports of realign­ment with some of the emerg­ing mega parties.