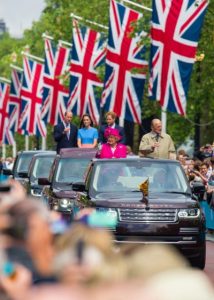 The royals have been sharing photos of the queen to mark the occasion on their social media profiles.

A troop of the Royal Horse Artillery will ride horse-and-gun carriages past Buckingham Palace before staging a 41-gun salute in Hyde Park at noon, UK time. There will also be a 62-gun salute at the Tower of London an hour later.

Princess Elizabeth Alexandra Mary was born at 2:40am on April 21, 1926. She is Britain’s oldest and longest-reigning monarch, having become queen on Feb. 8, 1952. She is also the world’s longest-reigning living monarch since the death of Thailand’s King Bhumibol Adulyadej last year.

On February 6, the queen became the first British monarch to reign for 65 year, celebrating her Sapphire Jubilee.

The queen usually spends her birthday privately. She also has an official birthday, marked in June – when the weather is better – with the “Trooping the Color” military parade.