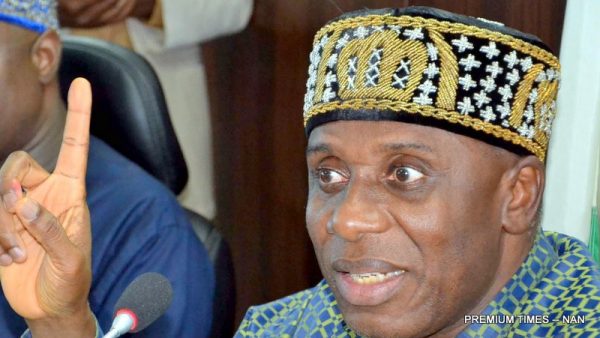 Four committees of the House of Representatives on Tuesday jointly expressed dissatisfaction over the implementation of the Federal Ministry of Transportation’s 2016 Budget.

They are Committees on Aviation; Land Transport; Maritime Safety and Administration; Ports, Harbours and Waterways.

The committees, which visited the ministry’s headquarters in Abuja on oversight function, threatened to give zero allocation to the ministry in 2017.

Mohammed Bago, the Chairman, Committee on Maritime Safety and Administration, said that the ministry presented different documents to the committees which did not contain facts.

He said that the ministry had received N243 billion and had yet to spend it, adding that if the money was not used before the end of the month, it would receive zero allocation in 2017.

“The different positions made to the committee of the house on both land transport, ports and harbour, maritime safety and administration as well as aviation has varied.

“We have received three different documents till date and all of them are not consistent and that is why we have asked for a new document to ascertain the value of what this project is all about.

“We are not going to appropriate on this budget until we have the fact and figure and if we do not have the facts and figure, the ministry of transport will get zero allocation.

“They have received 243 billion and they have not spent it when Ministry of Health needs money because people are dying of meningitis, Nigerian soldiers are dying in Sambisa, no money to fund the soldiers.

“The ministry of transportation is seating on billions of Nigerians’ naira released to it and is not utilised.’’

Patrick Asadu, Chairman of the Committee on Ports, Harbours and Waterways, said that members were at the ministry to ensure that money given to the ministry was well spent.

He said that the committee was not satisfied with the document presented to it, adding that the money was not well spent.

“Our being here is to help the ministry to ensure that money given to it was spent for what it was given for.

“But when this money is not well spent, we are not going to release further money; we are trying to look at what happened in 2016 budget; we are insisting that the ministry spends it or we give it to other agencies.

Aminu Sani, Chairman, Committee on Land Transport, said the budget presentation and performance presented before the joint committee was not impressive.

He said most of the items presented in the document were not in conformity with the expenditure.

According to him, the direct expenditure of the ministry is zero performance in terms of budget implementation.

Earlier, Rotimi Amaechi, Minister of Transportation, said that N60 billion had been paid for the Lagos-Ibadan Standard Gauge rail but there was a challenge with the counterpart fund.

He said that the Chinese EXIM Bank was to fund 85 per cent of the project initially, but it was currently funding 78 per cent.

He said that the bank insisted it would not pay for land, survey and tax, stating that with the current foreign exchange rate and the extension of the rail to the ports, the project could not be completed this year.